As we took our next steps into uncharted territory together this past Sunday in week #2, we highlighted God’s great desire to build his Tabernacle (Holy Tent) in the middle of everything.  That God chose to DWELL with His people and become the center of their lives.

In fact, if you read further past our text in Exodus 25, you’ll see how God even lays out the exact location of his Tabernacle amidst a nation of 600,000 Israelites arranged in 12 tribes.  One artist drew out the alignment like this:

Again, everything about God’s relationship to His people has him at the very CENTER OF EVERYTHING (that’s Him, that pillar of clouds).  Take a listen to this week’s sermon if you haven’t yet to hear that challenge for each and every one of us to keep God’s tent where it belongs in our lives.

All of which, of course, brings us to Ivan the Terrible. 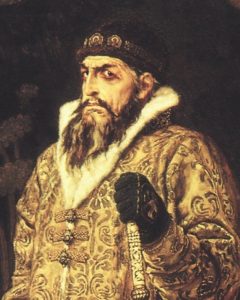 Now, if you’re familiar with history … you know that history doesn’t look too kindly upon Ivan the Terrible.  He wasn’t the nicest of guys …you don’t give the nickname, “the terrible” to “my buddy, Ivan, who’s just a real sweetheart,” after all!

The story goes that at when Ivan was reaching his forties some of his peers said, “Ivan, uh, you’re not getting any younger, you should get married.  How are you going to carry on your bloodline?”

And so, Ivan went on the hunt for the future, “Mrs. Terrible,” I guess?  It was then when he met a beautiful Greek girl named Sophia.  The problem, however, is that Sophia was a Christian and she said that before she would marry Ivan he had to be baptized.

Additionally, Sophia’s church, the Greek Orthodox Church, held as one of its core beliefs that you could not be a soldier and an Orthodox Christian.  So, Ivan had a choice, he could be baptized, marry the beautiful Sophia and give up his role as a soldier, OR he could continue being a soldier the thing that he loved.  Mr. Terrible devised a plan.

He ordered 500 priests to stand in a river to baptize his 500 soldiers. The soldiers marched into the river with their swords in their hands.  But as they entered the waters, they lifted the swords above their heads thereby submerging their entire bodies in the waters… except for their fighting hand.  As if to say, “you can baptize all of me but this.  This is still mine.”

So maybe the question God puts before us today is simply, “What do you refuse to trust me with?”  Or maybe an even better question, “What in your life won’t you baptize?”

Or as we heard in the sermon, maybe there is some sacred sea cow that you’ve been keeping locked up. One last thing that needs to be let go before you can step into freedom.  What is it?

And maybe today you just ask God to help you surrender it.  To take that thing you so love and to give it up as an offering before God to say, “THAT is no longer worthy of my trust.”

Whatever your story is, you’re not alone.  We’re going on this journey together because keeping God at the center of everything is a team sport.  We’re with you on this.  I’M with you on this.  I think it’ll be worth it when we become a church filled with people who’ve surrendered enough to keep God at the center of everything.